Injury PreventionLoading Your Way to An Injury Free 2019

Christmas, New Year and often January is a wonderful time of celebration and indulgence filled with family, friends and food.

It’s a great time to kick the feet up, enjoy whats left in the fridge and spend a little too much time watching the Tennis.

It is also that time of year for New Years Resolutions and for many people that involves the goal of dropping a few kilos by registering for the inaugural RunWEST Fun Run.

Motivation is always sky high at the start of the year and that means busy gyms and heavily trodden parks and pathways.  Unfortunately for many of those keen “New Years Resolutioners”  a common early stumbling block is an injury which STOPS momentum.

Staying injury free generally comes down to understanding your training load, knowing where to start and how to change it.

What is the Correct Starting Load?

It’s different for everyone.

For someone who has never run before, it might be a lap around the local park or street block for 5 to10 minutes.  For those with prior running experience it may be a 30+ minute jog.

A good place to start is to run at a pace where you are struggling to hold a conversation. This pace is just enough fast enough to get the heart and lungs working.  You will likely have some idea of your base fitness and from there work out how long to run for.

If you are really unsure, start with 10 minutes and see how you feel after.

Remember to “Quit while your ahead” – stop when you’re feeling good rather than feeling bad.

Coaches and Physiotherapists always talk about “10% at a time” because not only does it steadily improve your performance, but it actually decreases your risk of injury!

Research from the Australian Institute of Sport (Charlton, P & Drew, M 2015) found that athletes who have large fluctuations in their training load are much more likely to suffer an injury than those who train at a more consistent and moderate level. 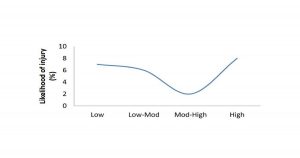 The key to building up to 12 kilometers is to give yourself time. It is estimated that it will take you 3 months to go from couch potato to a 12km RunWEST Finisher!

As Physiotherapists we see many clients who start too hard or bump up their training too quickly and only a few short weeks later they end up in our treatment room.

Keep Your Training Consistent and Let Your Body Recover

Going for a run every 2-3 days is a great place to start.  It gives you a day or two to let your body recover in between runs.  Your body will start adapting to your running program and make you more resilient to injury.

We all know life gets busy and missing a week of training is not the end of the world!

What is important to understand is that trying to do twice as much training the next week to “make up for it” is usually not going to end well and can increase the likelihood of any injury up to 4 weeks later.

In reality just completing a similar level of training as what you had previously completed the weeks prior will put you right back on track within a few weeks. Below is a good example of the progressive build-up of load.

This second example highlights over training (week 5) after a week of rest (week 4) and an injury occurring a few weeks later (week 9).

Get Small Pains Assessed Before they get Worse

Seek out professional opinion about small pains before they get worse.  It is easier for Physiotherapists to make small adjustments to training now than for you to have to stop training all together when the pain worsens.

Sydney West Sports Medicine has a team of Physiotherapists who can help.